They have been around in the USA for almost a year, and now they are also to be offered in Germany: Amazon’s in-ear headphones Echo Buds. 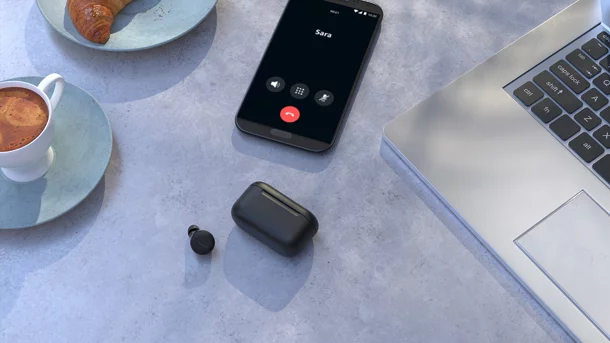 Amazon is also selling its Echo Buds in-ear headphones in Germany. The earphones can be bought from Wednesday in the Amazon store in Austria and Germany. The headphones usually cost 120 euros, but at the market launch they are temporarily available for 80 euros.The in-ears are the second generation of the Echo Buds , which have been available in Amazon’s US home market since April last year. The first generation of Echo Buds, released in 2019, was never sold in Germany. Accordingly, Amazon markets the headphones, which are called Echo Buds 2 in the USA, apparently simply as Echo Buds in Germany.In contrast to the first, the second generation of Earbuds masters real noise cancellation, the technology of which Amazon developed itself this time. The first-generation noise reduction technology was borrowed from Bose by Amazon.

The Echo Buds 2 are also splash-proof according to IPX4, so you can wear them worry-free during sports and in light rain. According to Amazon, the in-ears have been tuned to “high fidelity” for bass and treble. According to Amazon, the Echo Buds 2 can be operated for 5 hours with activated noise-cancelling technology, and the charging case can fully charge the in-ears twice. This results in a total runtime of 15 hours – compared to competing products, this is enough for a solid midfield.

Alexa vs Google Assistant, earbuds edition. Amazon released the Amazon Echo Buds (2nd Gen) and while no one will fault you for being skeptical, these buds are actually pretty good. They’re certainly an improvement over the original (discontinued) Echo Buds.

Are the Echo Buds 2 worth it?

You’d be better off with the AirPods Pro or Samsung’s Galaxy Buds Pro. But those cost considerably more, and if you’re not too demanding or simply want to watch videos and listen to podcasts, the Echo Buds 2 are perfectly good. It’s worth noting that there’s no support for AptX, just as with the original Echo Buds.

To access those features, you’ll need to download the Alexa app for iOS and Android. An Amazon account is required to sign in. By signing up for one of those, you must agree to its conditions of use.

Are Echo Buds good for running?

What’s more, the Amazon Echo Buds battery life is ideal for runners with a penchant for longer efforts, providing up to five hours of playback (these are the podcasts we currently love) per charge and a further 20 hours when placed back into the Echo Buds charging case.

How to Add COVID-19 Vaccine Records on Your iPhone?